Think you have a hard time getting enough exercise? Try being strapped behind the wheel all day. Find out how one Oregon transit company invested its SAIF dividend in wellness and logged enough steps to walk around the world—twice. 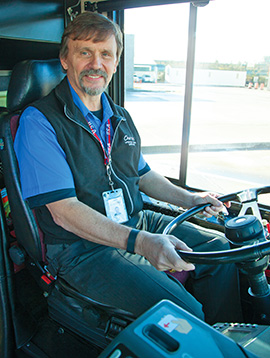 Al Bathke knows well what a normal workday is like for a city bus driver. Before he became a trainer for Salem-Keizer Transit, he was a transit operator and spent nine hours a day ferrying riders from place to place. Aside from a three- to four-hour break in the middle of the day, Bathke spent his entire shift in the seat of a bus. While on routes, his only “exercise” was to occasionally assist a rider on and off the bus.

“Most transit operators are not in great physical shape,” Bathke says. “Exercise isn’t at the forefront of their minds.”

He estimates the average Salem-Keizer Transit driver got fewer than 5,000 steps per day—less than half the number recommended by the American Heart Association for a healthy lifestyle. But that was before Salem-Keizer Transit launched an engaging wellness program that got district employees on their feet.

Michiel Majors joined Salem-Keizer Transit as the safety and loss control specialist in August 2015. That’s when wellness took on a new meaning for transit employees.

Using injury trend reports provided by SAIF Senior Safety Management Consultant Jacquie Strand, Majors identified what he believed to be the root cause of many of the district’s motor vehicle accidents and personal injuries: “The majority of our staff sat for the majority of their day,” he says.

The number of employees on the district’s health insurance suffering from chronic diseases had doubled in one year, from 13.8 percent to 26.5 percent.

Salem-Keizer Transit had a wellness committee that was working on ways to get employees more active, but participation was low. How could the district attract a majority of its nearly 200 employees to join and get healthy? And how would they pay for it?

With online contests, message boards, and tracking, the Fitbit program suddenly seemed like the answer to the organization’s participation problem. The other problem—how to fund tracking devices for all participants—was answered with SAIF’s 2015 dividend announcement.

In the fall of 2015, SAIF declared a $120 million dividend to be shared among 47,000 policyholders, including Salem-Keizer Transit. The district had received a dividend check before, but the money had never been reinvested into employee health and safety.

There was a financial incentive for employees as well: If they wore the device for a year and tried to get at least 5,500 steps every day, participated in wellness challenges, and joined the online Fitbit group, they would get the device for free.

Majors' bosses considered it a no-brainer. “The report he put together was so convincing. There was not a single hole in it,” says Patricia Feeny, communications director for Salem-Keizer Transit. “There was no way as an executive team you could’ve said no.”

The wellness committee had hoped for a 35 percent participation rate. Right off the bat, 55 percent of employees signed up for a Fitbit , and it wasn’t just transit operators. The CEO, office staff, directors, and managers also got on board.

The program has helped establish a greater sense of camaraderie and friendly competition among staff, some of whom never had a reason to interact before. Employees can choose to make their activity, eating habits, and sleep patterns visible online to the rest of the organization. It’s a way to check out the competition—and cheer each other on. 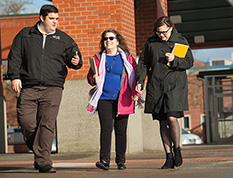 In 2013, Salem-Keizer Transit paid $31,388 in losses and had 11 injury claims. Comparatively, in 2016 the company paid $2,011 in losses and had seven claims . Specifically, there has been a decline in soft tissue injuries.

“Michiel has found a way to insert wellness in a way that encourages most employees to get on board and participate voluntarily,” says Strand, SAIF’s safety consultant. “He’s created a lot of trust with his employees.”

One transit operator lost 30 pounds and was motivated to get a personal trainer. Others have purchased gym memberships.