How the Bend PD is using yoga and mindfulness to help officers be safer, healthier, and better able to manage stress. 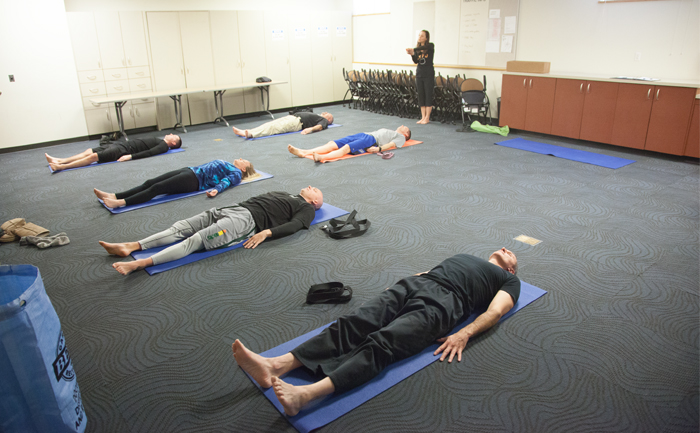 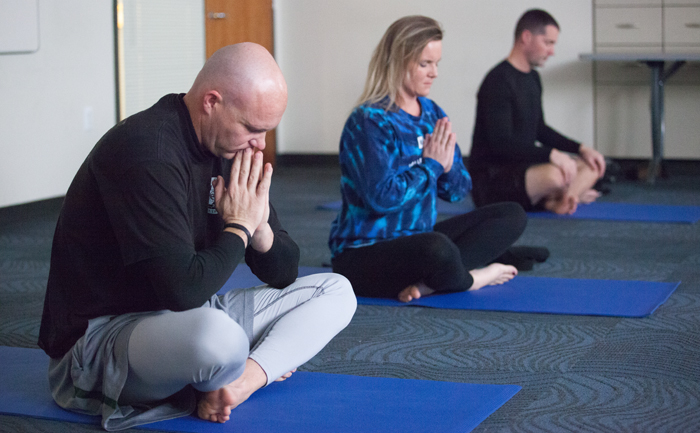 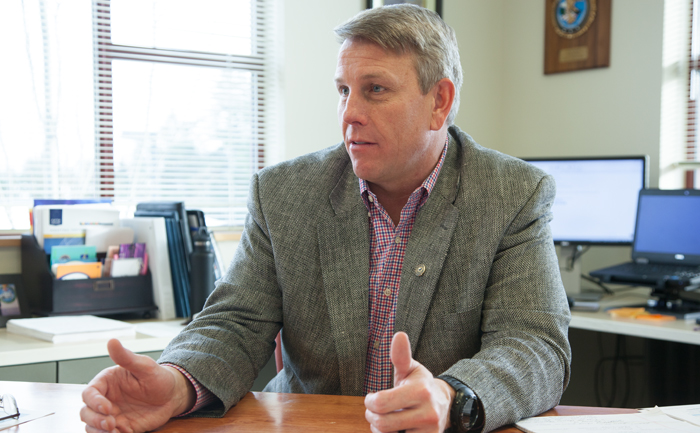 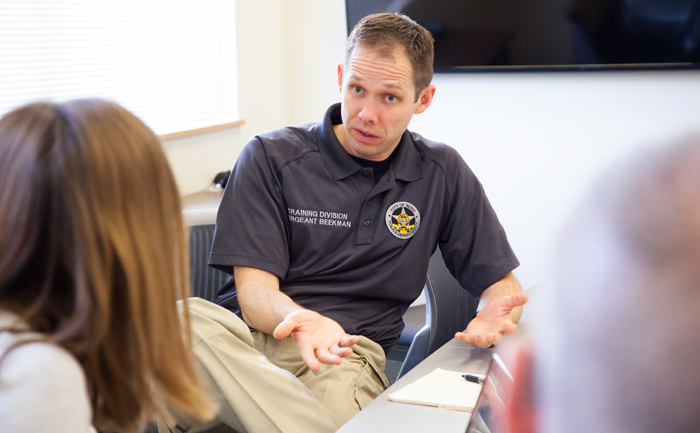 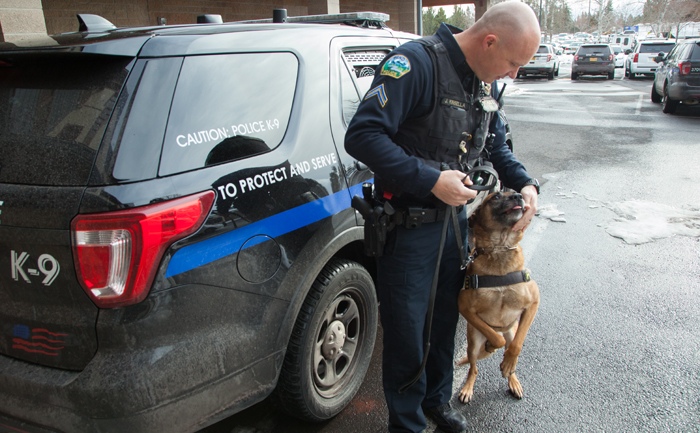 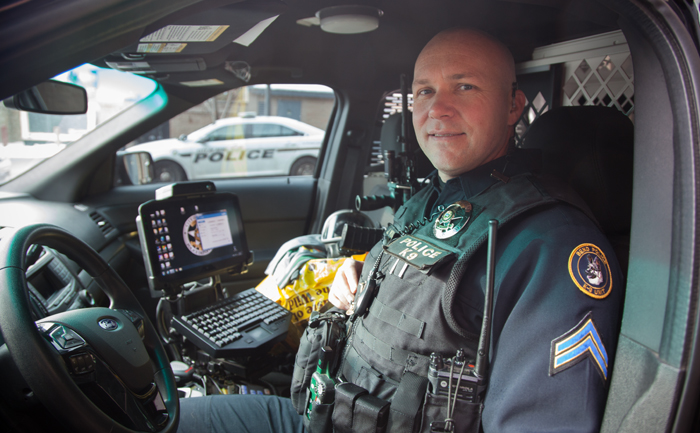 Six Bend police officers on the midday shift occupy a dark room at headquarters waiting for their next command.

It comes softly and slowly, from a female voice at the front of the room: “Slow, deep breaths.”

Instructor Jeanne Douglas urges the officers to stop thinking about their surroundings. They’re wearing old t-shirts and have bare feet as they lie face-up on yoga mats. Their eyes are closed, palms turned up. They could almost be asleep.

Douglas weaves in and out of the mats, gently correcting imbalance or poor form, as she delivers instructions for challenging poses and stretches. And then she gives the most important command of all: “Release.”

Following long minutes of silence, the class is dismissed. The officers thank Douglas, gather their mats, and leave to suit up for the rest of their day.

Something had to change

Yoga is just a small part of what’s happening at the Bend Police Department. Over the last few years, the department has begun offering several health and wellness classes and other resources, including a part-time psychologist, group fitness, mindfulness classes and retreats, family support groups, and different shift schedules for improved sleep.

“Three to four years ago, if you went into a patrol briefing and said, ‘Let's do yoga,’ they'd laugh you out of the room” says Lt. Brian Beekman.

It’s a rare approach to common problems in law enforcement agencies across the country—the kind of problems nobody likes to talk about.

At a national level, suicide is a leading killer of law enforcement officers, Beekman says. He's one of two full-time training officers at the department and the champion of the health and wellness initiatives.

In fact, nearly as many officers died by suicide in 2016 (108) as were killed in accidents (52) and felonious assaults (66) combined. “That national statistic connects very closely to us,” Beekman says.

Illness is another killer. Bend Police has lost two officers to cardiac disease and terminal illness.

“What's killing us? It's not the suspect on the street,” says Sgt. Scott Vincent, the other full-time training officer.

With exposure to excessive violence, long shifts, sleep deprivation, and a lot of sitting, police work in the traditional sense can be a recipe for poor health. But unlike many other strenuous occupations, officers are frequently given split seconds to make life-or-death decisions.

There is also what Beekman refers to as “the curse of public service.” Police officers are charged with bettering their communities and keeping others safe. Somehow, this often results in self-neglect. Their personal needs are not a priority.

Regardless of what is causing these widespread problems, something had to change.

“If we expect perfection with no mistakes, we need to build these health components with a fresh perspective,” says Beekman.

A new approach to health

A fresh perspective meant more than just the hour of on-duty time that had been approved for physical fitness. That approach resulted in many officers doing ineffective workouts, or not exercising at all. It didn’t do much to address their chronic back pain or long-standing knee injuries.

Several years ago, Beekman’s patrol team sought to improve their fitness as a group. They participated in a mix of team-based exercises, but this frequently left many of the officers feeling sore. They tried a few yoga classes and found that it provided relief from soreness and injuries.

In 2015, the department commissioned local yoga instructors such as Douglas to lead four one-hour classes a week with the goal of injury prevention. Mindfulness, a method to prevent and manage stress, is built into the yoga classes. It’s also offered as a separate 10-minute session at the end of patrol shifts.

Learn about the link between chronic stress and disease, and how yoga may help.

There were a number of obstacles to implementing a holistic health and wellness program.

The department was looking at a $20,000 price tag to bring in professional instructors for the wellness classes, and another $20,000 to contract a psychologist. But compared to how much they could potentially save on injury claims, that price tag didn’t look too bad.

When asked about the necessity of hiring a psychologist when the department already had a health program in place, Beekman pointed out the benefits of being proactive. The city council approved, but there was another group that needed convincing-the people the program was built for.

“How do we get their buy-in?” asks Captain Cory Darling, a 28-year veteran with the department. “That's an obstacle we didn't realize.”

Looking back at his early days as an officer, Darling says a lot of things might have been different if he’d had access to the programs available now. He might have sought counseling earlier.

“To survive a 25- to 30-year career in this chaotic profession, you need to start with the basic building block of taking care of yourself,” Darling says. You don’t think you need help when you have a badge.”

A shift in culture

Traditionally, the law enforcement community is closed-off, even suspicious, Beekman says. Often, their only contact with a psychologist is when one asks them personal questions before they start their job, perhaps looking for reasons they might be unfit for police work. This posed an interesting challenge for psychologist Andrew Barram.

In 2015, Barram helped design the job of a psychologist who would split their time between Bend’s police and fire departments, offering support on issues ranging from family to job stress, referrals to outside mental health resources, and training. The goal was to build resilience as a preemptive measure, not just after a traumatic incident.

Much like the yoga and mindfulness classes, Barram is strictly a voluntary resource. Officers are not required to speak with him, and those who do don't have to talk about anything in particular. He doesn’t push at all. Mostly, he listens.
“Sometimes it’s sitting in the car not talking about anything personal,” Barram says. “Sometimes I’m with an officer I know well, and we go there very quickly.”

He admits some officers aren’t comfortable with the idea of working with someone from a mental health perspective. In fact, when he first started, he recalls an attitude among many, like “who gets the psychologist today?”

Thankfully, that’s changing. Within the first year of Barram’s program, there were 33 staff-initiated contacts and 17 treatment referrals to external mental health resources.

“I’ve been impressed that they’re accepting of this very novel and very different approach,” Barram says.

Find information for how to manage stress and support a psychologically healthy workforce at saif.com/relax.

A few years isn’t long enough to determine the success of a new health program. Five years of data would be an ideal first look at whether this is working. Regardless, the numbers can tell us something.

In 2015, the first year the program made it into the budget, workplace injury claims dropped by more than 40 percent, says Beekman. There were a total of 14 in the 2015 policy year, compared to 21 for each of the previous two years. This resulted in a 68 percent reduction in costs due to officer injuries.

In 2016, the number of claims climbed back up to 19, according to SAIF safety management consultant Luke Betts. However, there was a drop in severity of the claims, as well as a significant drop in estimated claim costs ($43,000 in 2016, compared to a total of about $380,000 over the previous three years).

According to Scott Clark, safety innovations manager at SAIF, injuries range from exposure to disease, to suspect altercations, to noise exposure.

“When you ask most people about how to prevent physical injury to police officers, mindfulness and breathing techniques aren’t top of mind. It’s difficult to see the clear link as much as, say, providing lifting technique training to prevent back injuries. But the reality is, focusing on the totality of a worker’s health and wellbeing has an enormous impact on injury prevention” Clark says.

“It’s a much broader perspective, and Bend PD is blazing the trail.”

Beekman and Vincent are cautious as they analyze the results. These things tend to fluctuate, particularly in the infancy of a program. In the same short time the number of injury claims dropped, they could go back up as officers and staff are encouraged to take care of themselves and report issues.

They can be sure of one statistic: a 75-percent participation rate in the voluntary programs. They also have anecdotal evidence that the classes are making a difference.

“You do see the little anecdotes where a patrol officer invites someone else to yoga. You hear someone else openly saying they went and saw a counselor,” Beekman says. “That would have never happened before.” “A better person, better husband, better cop.”

Corporal James Kinsella, a canine patrol officer with an 11-year career with Bend Police, is a regular at the yoga sessions. His lower back pain has subsided, but the side effects go a lot further.

“I can’t close my eyes at work. I can’t relax. I'm always on alert. From the minute I put this uniform on to the minute I take it off, I’m alert,” Kinsella says. “Yoga gives me 45 minutes to completely let everything go.”

At first, it wasn’t easy for him to assume a position of vulnerability. But after a while he noticed that his demeanor was different.

Kinsella often faces those big-decision moments. He has to protect victims, suspects, and himself. Bend police have seen significant improvement in the way officers respond during incidents. Since 2012, there has been a 43-percent drop in use of force at the department—partly due to crisis intervention training and partly due to a renewed focus on improving officer performance through better health.

Another unexpected consequence of the classes, Kinsella says, is he feels like his city cares about him. There is a new level of comfort in his job knowing that his department cares about his wellbeing.

“I’m a better person, a better husband, father, cop,” Kinsella says. “That’s the intent of this program—to make us better people. Being a better cop is just another consequence.” 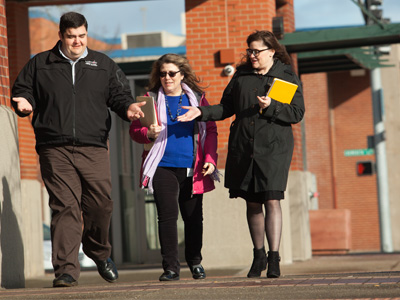